I did some homebrewing in university to save money but the results were never great and I gave it up when I got a full time job and could afford "real" beer. Twenty years later, I figured the state of the homebrewing art had advanced quite a bit and thought I'd give it another try. This is my first brew in my "new" brewing era.

I'm using the IPA kit from Brewer's Pantry. Huge thanks to Spencer at Brewer's Pantry for getting me started with all my equipment, encouragement, and advice, and to Melissa for recommending Spencer.

I started the yeast in pre-boiled water a 500mL mason jar. I had boiled the jar and lid in with the water, filled the jar with boiling water, sealed it, and left it to come to room temperature before adding the yeast. The yeast sat for about 10 hours (rough guess) before pitching. 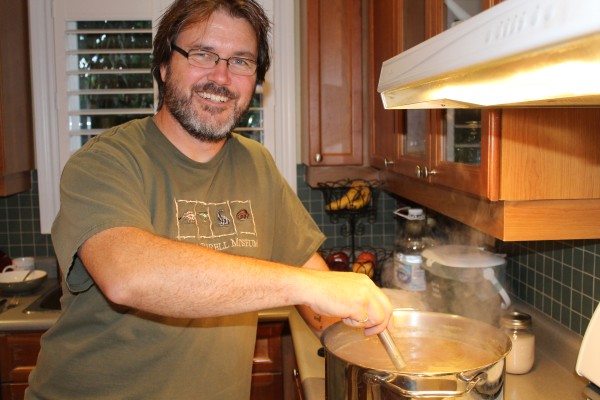 Cooling the water and the wort took much longer than expected. I put the water in the fermenting bucket in a bath of cold water and ice in my laundry tub. Once the wort was boiled I took out the fermenter, put the stock pot into the bath, and added more ice. Ended up using all the ice in our refrigerator's ice maker and it still took hours to cool. After about 3 hours (another rough guess--I promise to keep better track next time) I got impatient and decided to carry on. I poured the wort into the water in the fermenter, taking care to leave the trub in the pot. Wort temperature was 24°.

I might look into making a wort chiller for my next batch.

I aerated by shaking all 5 gallons in the fermenter, using a bit of plastic wrap and my thumb to seal up the fermentation lock hole. Quite a workout, and I was only able to keep it up for a minute or two. Not sure if this was enough.

I don't yet have a hydrometer so I can't report on initial gravity.

Pitched the yeast and put it in the basement where the ambient temperature was about 22°. Fermentation lock started bubbling about 20 hours later.

As per the instructions, the beer should be ready for dry hopping on Sept. 20 (14 days) and for kegging on Sept. 30, just in time for hockey season!

Now to start ordering the keg equipment and setting up the beer fridge.

I'm the co-founder and CTO of Effective Registration. Previously, I worked as a contract developer, system architect, and development team leader for over 20 years.

My major open source contribution is the Vex XML editor. Vex has been adopted by the Eclipse WTP Incubator and will hopefully one day be the official visual XML editor for Eclipse.

Also, check out my SQL Builder library for lightweight dynamic SQL in Java.